Sailing with LeMaker Guitar and FairWind integrated multifunctional navigation software based on open technologies: exploring new routes for DIY marine electronics thanks to the internet of sails.

The Internet of Things, left already its status of cool hype buzzword, is gaining a growing interest in science, research and business with issues in humans’ everyday life that are till now unpredictable. From the cultural point of view, the flying wheel effect of low cost computing technologies, mainly single board computing and easy to program microcontrollers and the makers movement pushed a renaissance of bottom up creativity facing the brand pushed tech tools. The Internet of Sails moves the focus of the internet of things on boats and yachts, offering brand new development opportunities to mariners ranging from the amatour sailor to the professional fisherman to the high level around-the-world sailing racer. This is a huge market where the availability of spending money is high, but it varies in order of magnitude from hundred dollar to multi-billionaire budgets.

FairWind (http://fairwind.uniparthenope.it) is an integrated multifunctional navigation software based on open technologies and open hardware marine portable console computer, leveraging on a built from scratch infrastructure on top of stable and well documented mobile and web technologies.

FairWind is an university initiative born in the High Performance Scientific Computing Smart Laboratory of the Department of Science and Technologies at the University of Napoli “Parthenope”, joining the effort of the “Sebeto – Student Creativity” and “Hack Arts Lab at UniParthenope” innovative teaching projects (http://hpsc.uniparthenope.it ) and the “Regional Centre for Marine and Atmosphere Monitoring and Modeling” (http://meteo.uniparthenope.it ). FairWind is open hardware because it works on world spread common embedded system-on-chip boards supporting the Android operating system as the market ready LeMaker™ Guitar (http://www.lemeker.org). It is a high performance SoM adopting an Actions S500 SoC (Quad-core ARM® Cortex™-A9R4 CPU and PoweVR SGX544 GPU), 1GB, or even 2GB, DDR3 and 8GB Flash. 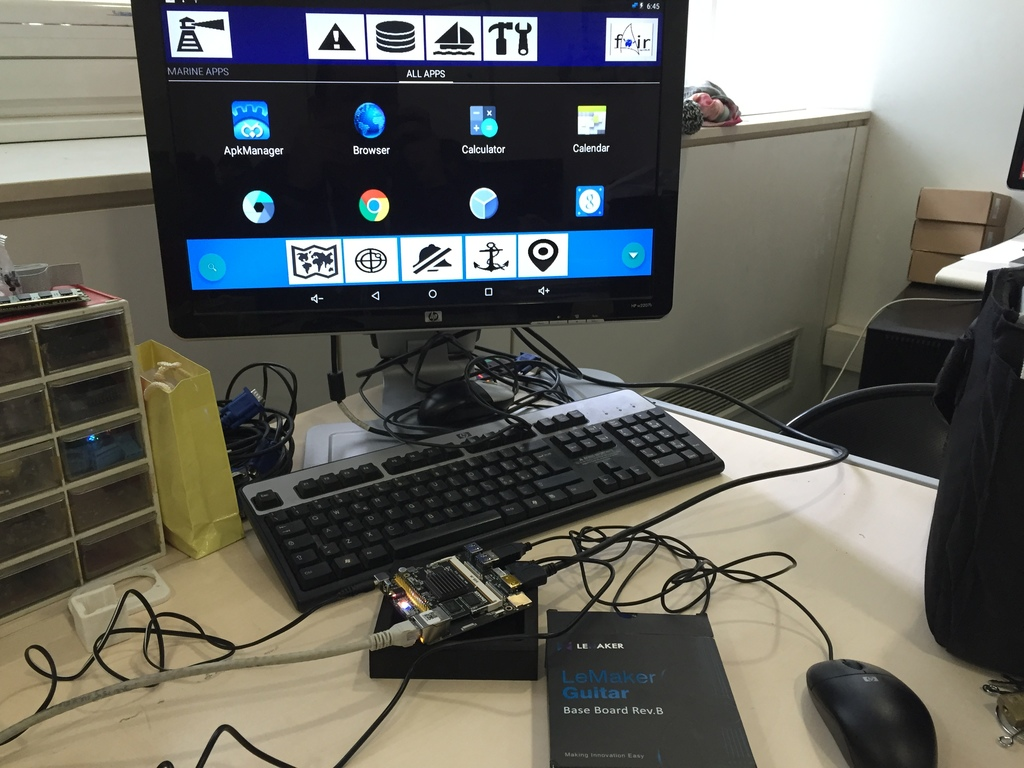 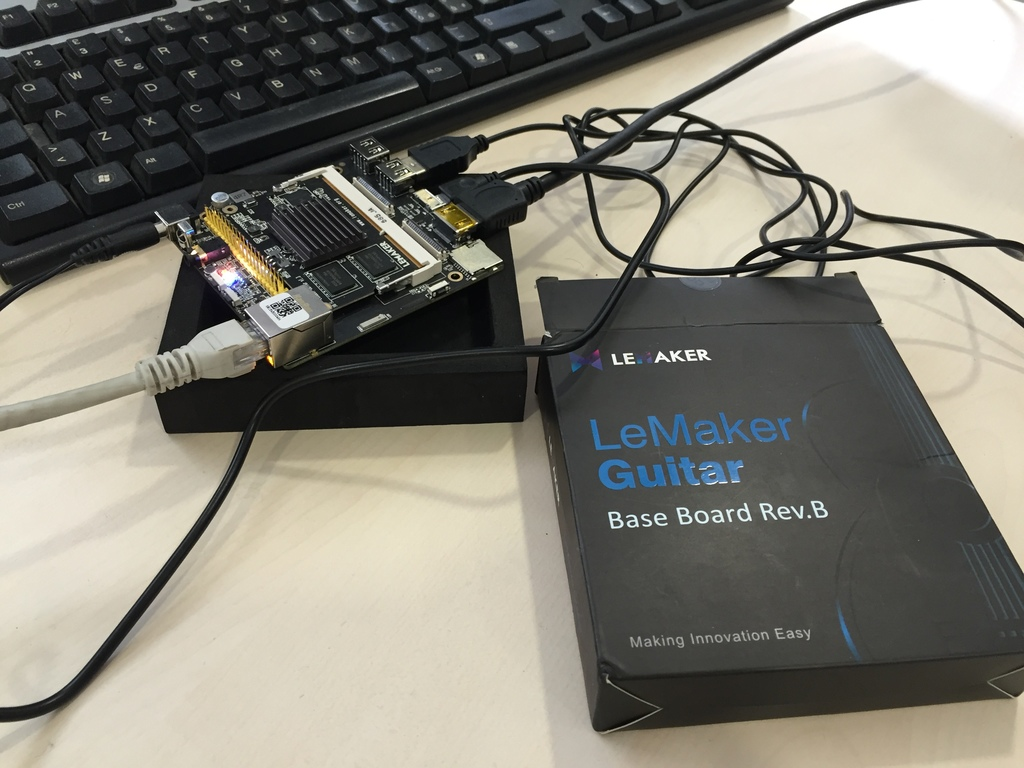 On the software side, FairWind is extensible with the only limitation given by imagination, creativity and the hardware costs. Virtually any kind of sailing instrument or transducer could be connected and its data acquired, processed and shared in a crowdsource way. FairWind could be fully customized creating new ad hoc boat apps (BApps). BApps can access to all boat data and create and share new parameters. Users can download and install BApps from the regular Google Play store, but, of course, the FairWind app has to be up and running on the device.

Running FairWind on the Guitar board.

The FairWind Team tested its system on the LeMaker Guitar running Android 5.  Fairwind framework is very complex because, differently than the regular Android apps, it implements server side components and high demanding data management: FairWind requires a lot of resources (especially RAM). The first Guitar’s masterpiece touch is the 8GB MMC on-board flash with pre-installed Android operating system, characterized by a really impressing high performance read/write operations. This characteristic is really important for FairWind users because the system could be up and running without any steps of preparation (very common in similar boards).

In a modern marine electronics setup ethernet, USB and wifi connections are very convenient making simple on-board data networking. The FairWind framework acts as a data hub and take a huge advantage from the Guitar connectivity allowing a straightforward management.

FairWind leverages on Android inheriting the capability of running on the most different environments, from the headless prototype board computer to the finest high-end branded tablet with a gorgeous screen resolution. The Guitar implements an amazing feature embedded within the operating system related to the ability to adjust the screen resolution in relation to the actually connected screen device.

Boatyards, boat builders and riggers/operators could find extremely interesting the hardware customization allowed by Guitar SODIMM format. In this way, it is possible to create tools with I/O pre-installed directly connected to legacy on board instruments and sensors. This moves the centerpoint of the business from the marine electronics brands to the professionals of this expertises. 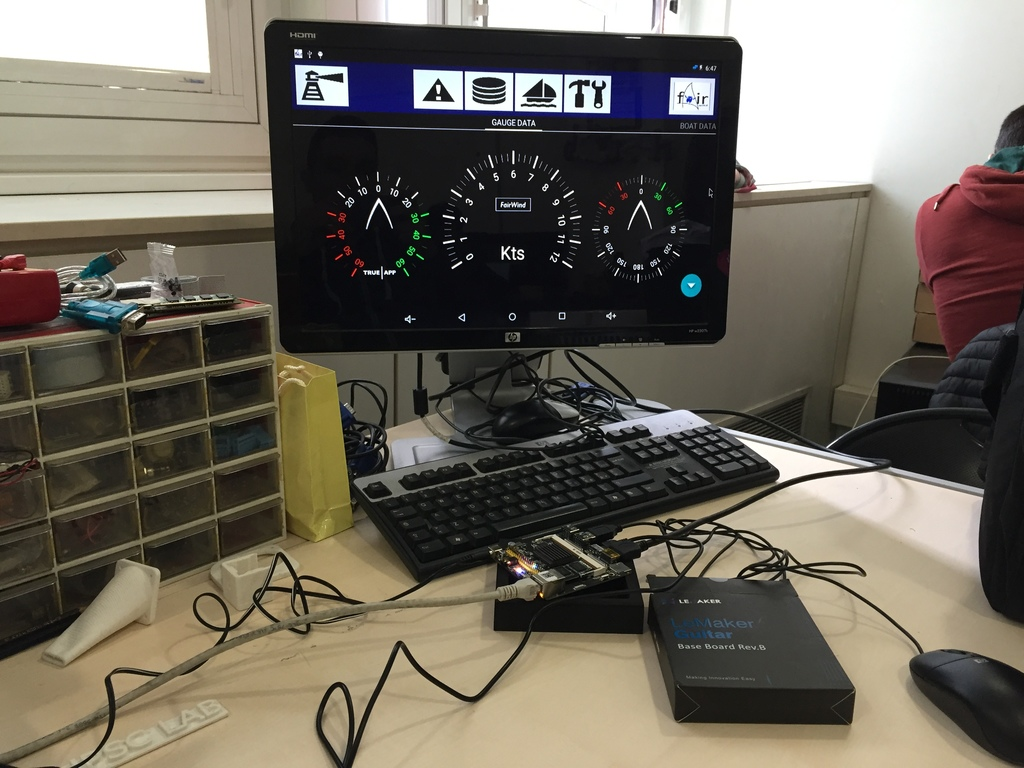 The FairWind team is already at work on designing an interface board fitting the Fairwind framework (legacy transducers and sensors, RS232, CanBus, etc.) for the communication with the industrial standard nautical bus and the rising open data SignalK (http://www.signalk.org ), already adopted and supported by FairWind.

The FairWind team suggests the LeMaker Guitar as one of the best solutions to be used as heart and control center of the whole system, in order to create a low-cost and multi-purpose tool for navigation and entertainment on board.

The FairWind testing and benchmarking on the Guitar nice hardware has been possible thanks to LaMeker, that gently donated a Guitar developing board to the High Performance Scientific Computing Smart Laboratory, Department of Science and Technologies, University of Napoli “Parthenope”. More details on http://www.lemaker.org.

END_OF_DOCUMENT_TOKEN_TO_BE_REPLACED

I want to support you